Today marked a fabulous ending for a months long process. Back in February, advanced Studio 401 students began to come up with ideas for their entry into the annual Printing Industry Association's T-Shirt competition. Although it was our first time using our new silk screen equipment, Studio 401 wanted to make a strong entrance into the realm of graphic arts competitions. Several design ideas were explored and all Studio 401 classes voted for their favorite ideas. The designs were required to incorporate a pro-literacy concept aimed at children. In the end it was Alan Martin's concept of a dragon coming out of a book that won the imagination of our students. 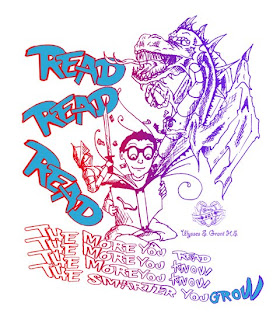 Phase two of the process involved finalizing the artwork. Angel Martinez stepped in to illustrate Alan's idea and bring it to life. Next, more students stepped in to help with the production process which included not only printing the shirts but documenting the process and creating a storyboard that outlined the entire project.

All of the hard work put in by the Studio 401 students and their teacher paid off at the PIASC award ceremony on April 29th. There were many worthy contenders from other schools, but the new kids on the block, Grant's own Studio 401, stole the show by winning 1st place in both categories: Best Production and Best Design. Two large and showy trophies were awarded to Studio 401 as well as $900 for the graphics program. 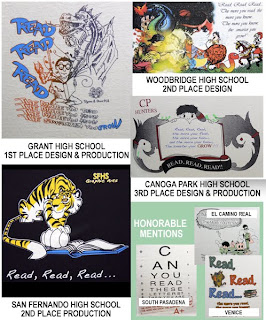 For more information about the competition, visit the PIASC website.
Posted by Decklebyte at 8:59 PM 0 comments

Congratulations to Andrew Gary who's artwork was chosen to be used on the poster for the Spring Musical: Fame.  Andrew's artwork was so well liked that he was asked to make a series of similar posters for the play.  Andrew's designs show colorful silhouettes of some of the actual cast members that you will see performing in the show. Everyone at Studio 401 looks forward to seeing these beautiful posters around campus and to seeing the exciting performances starting on April 29th. 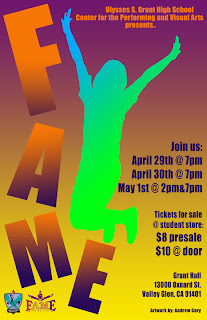 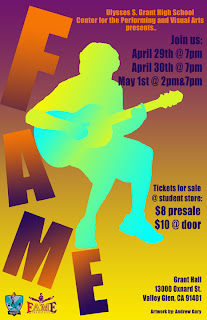 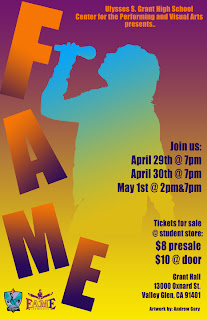 Posted by Decklebyte at 9:52 PM 0 comments

Winners of the Photography as Art Competition

Studio 401 made a strong showing in the Valley Cultural Center's Photography as Art Competition and Exhibition. Five students made it into the top 25 images and were included in the exhibit. Additionally, Studio 401 had two winners including 1st place! 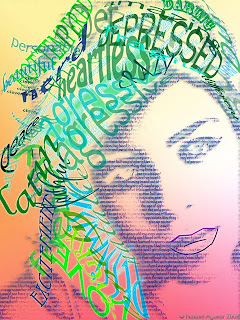 Congratulations to Natalie Aguilar who took 1st place in the show. The judges were very enthusiastic about her self-portrait made entirely of auto-biographical text. Natalie portrayed a range of emotions with gentle tonal transitions as well as bold contrasts of color and typography. For her efforts, Natalie was rewarded with a $1000 scholarship, $100 worth of photo developing, a professional lighting kit, a beautiful blue ribbon and a certificate. 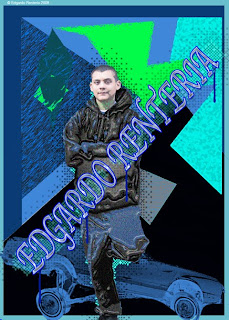 Edgardo Renteria's entry was awarded an Honorable Mention. For this, he received a handsome white ribbon and a certificate. His winning artwork shows his love of car culture and cultivation of a grunge aesthetic.
Posted by Decklebyte at 8:10 PM 0 comments